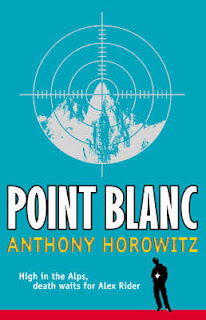 Alex Rider is back!
Well, sort of. Point Blanc picks up two weeks after Stormbreaker, Alex is back at school and going through the humdrum of teenage life one day at a time.
Spying has changed him irrevocably, (much to his dismay) and he finds himself with an unshakable desire to take the law into his own hands. After a disastrous attempt at vigilantism, Alex finds himself back at the mercy of the Secret Service with a brand new mission even more dangerous than the last.

With a storyline more hilarious than Stormbreaker, our young spy is sent to a boarding school for delinquents- a place which may, or may not harbour a deep, dark secret.
I can't tell you how much I enjoyed reading Point Blanc, and I feel the rest of the series can only follow suit. It's perfect for rainy afternoons, as it doesn't take very long to read at all. Alex is a very likable character and even though he's probably living the dream of every boy his age, you can't help but feel sorry for him a little bit. It all seems to be well out of his control.

Alex gets himself into some very precarious situations in this one- from riding horses in train tunnels to dodging bullets in the woods. It's not a spy story without the amazing gadgets either, think less tricked out handheld gaming devices and more exploding earrings and night vision goggles. Let's face it you can't be somewhere in the Alps without night vision goggles, the possibilities to use them must be endless.

What I really like about these books is the simple fact that they're entertaining as hell, and not as predictable as you'd think. Horowitz knows how to keep you on your toes, even if you are about 10 years older than the reading demographic. Sigh, what I wouldn't give to be ten years younger. And male.

I know I've said this before, but I just cannot wait to read the rest of this series.

Review: The Fault in our Stars

I loved Looking for Alaska (you can find that review here), it set the bar pretty high for me, so it was no surprise that I found myself feeling a little nervous when picking up his latest novel.
Honestly though, I needn't have been worried; John Green writes coming of age, young adult fiction like none other author I've read before. Just when I thought my heart couldn't take any more love for this man, this book is dropped into my lap.

The Fault in our Stars focuses on a sixteen year old cancer patient Hazel Grace. Diagnosed with clinical depression, (a common side effect of cancer), she is forced to attend weekly support group meetings with other people her age.
It is here she finds friendship, love and support from seventeen year old Augustus Waters, amputee and former basketball extraordinaire.

Now, I know reading a book about a group of teenage cancer patients doesn't seem like the most uplifting thing to read about, but you'd be surprised at the level of warmth and beauty that resonates from this book. Of course, it's tragic; these characters are pretty much going through life with one foot in the proverbial grave but they try to live their lives with a sense of purpose. Green writes the emotions these characters feel beautifully, he doesn't sugar coat the pain these characters feel and he leaves all the jagged edges of a disease like cancer very much alone. There's pain involved, and we are to expect it. I've never doubted his ability to put together a good story, I felt like crying and at times I didn't want to read it because I felt like my heart was going to explode. In a good way, you know- if there's such a thing.
It's definitely something I have and will recommend people to read, as a nerdfighter, as a fan of the author and the lover of beautiful words, I will recommend this to everyone. We all need a little John Green in our lives.

I didn't want this, but there is a however.

Although it's beautifully written, the characters seem very similar to me. They are dangerously close to the ones in Looking for Alaska, they have the same personality traits and speak with the same voice. I won't deny that all of Green's characters I've come across so far have an almost irritating pretentious thing going on, which I can forgive as the writing is fantastic. I like the fact that he writes up nerdy, witty, intelligent and well read teenagers, but I can't help but wonder the more John Green I read, the more these same stock characters will keep cropping up. I'm hoping it isn't the case but only time will tell. I have faith in the man to prove me wrong. 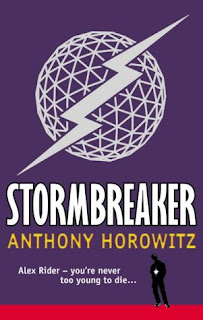 I've never been able to get into spy fiction or detective/mystery novels, it has nothing to do with my not liking them- I've just never paid them much attention before. When this was recommended to me, a silent mantra was going through my head, "I don't read spy books, I don't read spy books." I'm not really one to back away from a challenge though, and nothing can grab my attention like a book written for children.

After the untimely and suspicious death of his uncle Ian, fourteen year old Alex Rider is recruited into the world of espionage against his will. In exchange for a normal life, he agrees to complete the mission his late uncle had started- but first he has to go through an intense spy training programme.

I really loved reading Stormbreaker and I actually just want to pack up my life and become a boy spy.
And it's just perfect for young people (not just boys, I don't think) and for anyone who loves reading children's stories. It's really easy to get through, I finished it in about 2 hours. If I'm honest, the plot is absolutely preposterous but that's half the fun of it, really. The language is really basic but doesn't hold back on the excitement, I was eager to get on with the book and found myself slightly disappointed when it ended. I can't wait to be in possession of the rest of the series! I'll try and review it in the best way I can!

Truly, this has really made me want to read more in this genre and maybe start some detective novels too. I'm not sure if I'm ready for the likes of Arthur Conan Doyle just yet I'm sure I will be given enough time.

Review: A Game of Thrones

It's been a long time since I indulged in some fantasy, I figured this was the perfect book to reimmerse myself in this wonderful genre. People have been raving about A Game of Thrones for a very long time now, mainly the HBO series but I tried (and failed) to avoid any televised works until I picked up the book. The series was a good as they said, with a slightly guilty conscience I began reading, hoping it would be even better.

I'm glad to say it didn't disappoint. At all. It was a brilliant read.
As far as the plot goes, it's pretty much a staple in the world of sword and sorcery fantasy. Mythical creatures, something supernatural, bouts of sex, bloodshed, and lots and lots of war.
Regardless of it being a not-so-original story arc, Martin excels in it. It was so well written and I was pretty much hooked within the first 50 pages. It sounds like a lot to get through initially but sizing it up against its entirety, a 800+ page epic, it's not very much at all.

It's a difficult one to talk about, there's far too much to say and not enough spoiler free information to say it. The story is centred around the Stark family of Winterfell, Lord Eddard Stark (Ned) has been offered the position as Hand of the King, which requires him to move from the cold north, to the warmer southern climes of King's Landing.
Martin has created a world where the seasons could potentially last lifetimes. Summer has lasted for decades and is now drawing to a close, and the other side of Winterfell's protective Wall isn't the only place where trouble is brewing. Across the seven kingdoms, admist all the lies, manipulation, violence, and betrayal, the quest for the Iron Throne of Winterfell is underway.

The novel is split between the points of view of several of the characters, which include whole House of Stark, a bastard child, a Dragon Heir and the Imp. As always, character jumping gets a little confusing at times but you quickly find your pace with it. I did find myself looking forward to certain character chapters than others, which made parts of the book drag a little. The characters themselves were very well written, I only truly warmed to a few of the characters but it was enough to keep me interested, I was mainly on the edge of my seat hoping that nothing bad will happen to them.

I made the somewhat catastrophic mistake of watching the series before reading the book. It's not something I usually do and I'll let this serve as a fair warning to not do it again. I really loved the first installment in A Song of Ice and Fire but I feel I would have done so even more if I had read it first. It's definitely something I would recommend if you don't want Sean Bean popping up in your head every time Ned's name appears.
Although, if you have watched the series already, I would still encourage you to read this. The televised series pretty much follows it word for word, the extra bits will just seem like extended scenes. The only downside to this book is the weight of it, it's a bit of an inconvenience if you carry it around everywhere like I did.
Trust me though, the pain is worth it.