It's been exactly a year since the events of the first book, and thirteen year old Stephanie (now known as Valkryie Cain) has remained the faithful sidekick of Skullduggery Pleasant. After successfully ridding the world of Nefarian Serpine, the duo set about catching other criminals for The New Sanctuary.
Playing With Fire focuses on the recapture of one Baron Vengeous, the big bad who escapes prison in order to find the armour of Lord Vile, and (much like Serpine) have the opportunity to ressurect The Faceless Ones.

While trying to save the world once again, Valkryie learns more about the magical world, as well practising her budding powers. Life seems much easier fighting crime, when one's reflection can successfully live out the banalities of teenage life.

The second in the Skulduggery series continued just how I hoped it would; there was a progression of the larger story arc as well as delving a little deeper into the relationship of Valkryie and Skulduggery. Some of the other minor characters had some development too, which was nice. (Particularly China Sorrows, I think I've got the makings of a female character crush happening.) The new characters were as I'd hoped, absolutely bonkers. I've been finding it really difficult to dislike any of them in this, not even Thurid Guild, who is charming in his own little annoying way.
I especially relished in learning a little more about Skulduggery himself. In a way, the undead wizard reminds me a lot of the 10th Doctor, with his quirky disposition, and silly humour; his deep rooted anger, and his unequivocal sexiness. I definitely do not disapprove.

I really love Landy's writing style, he manages to mix very light hearted humour with dark and twisty emotions and still have it child friendly. It's definitely entertaining and adventerous enough for a young age group, which is a good thing especially if you have the concentration levels of a four year old like I do. I'm thoroughly enjoying this series at the moment, and I find myself wanting to get through the series as fast as possible or to savour it slowly. Decisions, decisions. 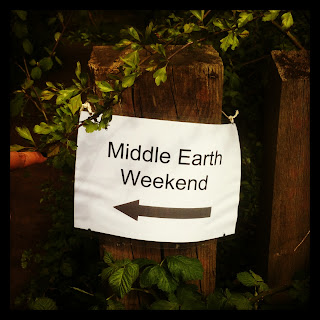 The event was held on Saturday 11th, and Sunday 12th of May at Sarehole Mill, in Birmingham. The mill is best known for its association with Tolkien, who used it and the surrounding areas as inspiration for the Shire in The Hobbit and The Lord of the Rings. It's also one of two of the only working watermills in the city.

I've been trying to attend Middle-Earth Weekend for as long as I can remember, so yesterday I finally managed to cross it off my literature bucket-list. It is a free event that celebrates the life of J. R. R. Tolkien, and of course the the works that irrevocably changed my life when I was a young girl. 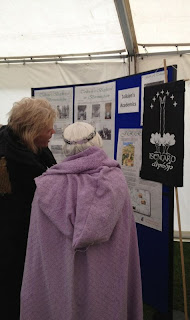 Of course when it rains, it pours. The weather nothing short of awful, but I didn't let that dampen my spirits in the slightest. I plucked up my courage, my blackest cardigan, and declared myself the Witch-king of Angmar. Of course, I had two little halflings with me- and oh the rainy fun we had.

The outdoor festival had medieval re-enactments, craft tents, story telling, archery, barrel racing and most excitingly COSPLAYING GALORE. Not to mention: dragons. Lots and lots of dragons. I was laughed at by Gandalf the White, got attacked by a Uruk-hai from Isengard and caught some elves reading in one of the tents. Plus, there were tiny little Hobbits and far as the eye could see. I even managed to visit a Hobbit-hole. There was an opportunity to have a tour of the mill as well, but we left that for a brighter (and drier) day.

It was so nice to see so many faces supporting such a wonderful celebration, people often forget that a lot of the inspiration from Tolkien's world is right on Birmingham's doorstep. I wish they'd taken more advantage of it, New Zealand gets ALL the credit.
I managed to speak to someone at the information desk who told us that this could be the last Middle-earth weekend due to a lack of funding, which makes me incredibly sad. I wish I'd made more of an effort to go for all these years.
If it is the last one, I'm glad I had the opportunity to meet so many like minded people and experience the sheer amount of love and pride attached to the event. Fingers crossed for a Middle-earth weekend 2014! 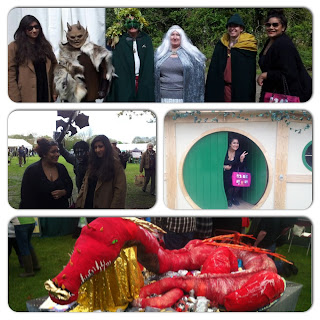 Be sure to visit Sarehole Mill, and help keep it running! Information here.
Also, become part of the Tolkien Society, it's the next thing I'll be doing.