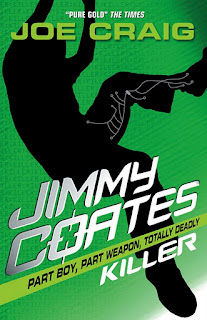 What I truly love about literature is the infinite possibilities you have in the realm of 'firsts'. First classic, first Byron poem, first self confessed obsession with a Potions Master...
I hereby bestow the award for 'First One Sided Shouting Match with my e-Reader' to Jimmy Coates. Now, I'm not one for crazy heroics, I tend to leave that to the Percy Jacksons and Harry Potters of the world- but I genuinely thought that my emotional ramblings would change the fate of this boy. Thank you Mr Craig, for a madness worthy of the Hatter himself.

Jimmy was a normal boy, content with doing normal boy things; fighting with his sister (and losing) and pretending to be interested in the news. An evening of normality was quickly thrown into the wind when a bunch of suited men arrive to his house asking for 'the boy.' The need for safety stirred something inside Jimmy, and he found himself escaping the clutches of these men (not for the first time) in the most extraordinary way.
As the men proceed to chase Jimmy around the city, the eleven year old boy is filled with nothing but questions. Questions about his new found powers, about these mysterious men and just how his parents knew them and most importantly, what exactly was happening to him.

I didn't really know what to expect, usually when someone tells me to read a book I immediately think of all the ways it won't be like the ones similar to it; it's a bad habit I really can't shake, although this feeling usually leaves me with a pleasant surprise.
Killer is a wonderful introduction to a series, I felt it was a little bit long on the 'chase' bit of the story but on reflection I feel it was the intention of the author to thoroughly destroy every avenue of trust Jimmy had accumulated in his short life. The idea of this saddens me, but I see it now as a necessary plot device, considering what actually becomes of the boy.
Once the plot picks up, the pace quickly moves along as well, and it becomes one of those books you just can't put down. So much happens in a short space of time, I found myself having to force myself to slow down in order to properly realise what was happening, when all I really wanted to do was find out what happens next. In the interest of keeping these reviews as spoiler free as possible, there isn't really much I can say plot wise without ruining it. You're just going to have to trust me.

One thing that really surprises me is how much I felt for Jimmy, maybe it's his age, or his sheltered outlook on life- I wanted to give him a hug, ruffle his hair and tell him it was all going to be okay. After all, being a weapon isn't all that bad, right?
It could be that Craig's wonderful whimsical writing style has a lot to do with it. Although the story did get dark, at times I also found myself erupting with genuine laughter. The previously unused highlighting feature on my e-Reader got a thorough workout too, there are some wonderfully constructed sentences that just left me grinning from ear to ear. It's books like this that reawakens my dream of wanting to be a boy-hero and it's wonderfully satisfying. If the first book can have me waxing poetic like this, I can only imagine what the next book has in store for me.

According to Joe Craig's official Twitter account, the release of the seventh Jimmy Coates book is out this June- it's more than enough time to power through the others before then. I don't think anyone would be disappointed in reading them, I feel this series really needs a lot more coverage than it gets. With that said, go forth and buy! I know I will be. 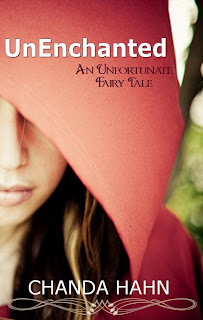 Meet Mina Grime.
Mina is a unpopular, she's so uncoordinated she makes Bella Swan look like a master of grace and she's unlucky (although, not in the way she thinks).
After a field trip goes awry, Mina ends up almost killing (and then saving) the boy of her dreams, and is consequently thrust into the world of popularity. Her new found limelight brings an old family curse into play, for Mina is a descendent of the brothers Grimm and is destined to fight the evil stories that are trying to kill her.

Every once in a while, I get a reading request that is a bit worrying. This was one of those times, as a free e-book though I can't really complain, but I will anyway. (I should probably mention I read this with a friend and we discussed our reactions in real-time.)*

I really liked the idea of a curse like this, as darker sides of fairy tales is a personal favourite of mine. There is nothing in this world I hate more than a good idea that is poorly executed.

You know something is wrong when the characters are so flat and unlikable, not even borrowing obvious traits from other book series help plump them up. (We even had a Snape moment, you guys. Turns out Mina's father James is a no good, arrogant, imbecile too!)
We also have the two polar opposite boys to help form the love triangle: the brooding misunderstood rich kid, and the quintessential leather jacket clad, motorcycle riding, bad boy. He's also brooding. The minor characters are no different, really. Same unlikability, in different bodies. It almost doesn't need to be thought about.
They all have their roles, and stick to them rigidly, the boys spend their entire time saving the damsel in distress, fighting with each other and mooning over their emotionally unavailable object of affection. Even Mina was tiresome for someone who, for a lack of better phrasing, should have been learning to kick some serious ass. She spends most of her time being stubborn, unreasonable and feeling ridiculously inadequate to every single person around her. It was entirely unbecoming, I was half hoping she'd get killed off and we'd be allowed to see her mute younger brother get a piece of the action.

The character jumping in this book was the least of my problems, although trying to figure out who's point of view I was looking at did leave me with a migraine. The plot and writing style ranged from dire to unintentional hilarity and I found I was trapped between a rock and a hard place (or in this case, grimacing and howling with laughter). You don't have to be a master of grammar to understand the basic concepts, the amount of typos borderlines worrying. My all-time favourite incident being, "Mina, they're coming over her!"  The plot holes were many and the editing was questionable at best- I was led to wonder if anyone had actually proof read it at all.
Where it lacked in grammatical correctness, it all but made up for it in the sheer abundance of misinformation and general ridiculousness. A special mention here goes to the casual racism in the form of Mr and Mrs Wong, who not only own the Chinese restaurant underneath Mina's apartment but are guilty of more spoonerisms than William Archibald Spooner himself.

There was so much wrong with this book, that I ended up loving it for all the wrong reasons. It is, in short, an exquisite guilty pleasure and I just can't wait for the sequel. I hope is just as irksome as this one. If you want to join in on the fun, you can download the e-book here.

*Thanks for making all the live reaction readings bearable, Emma!