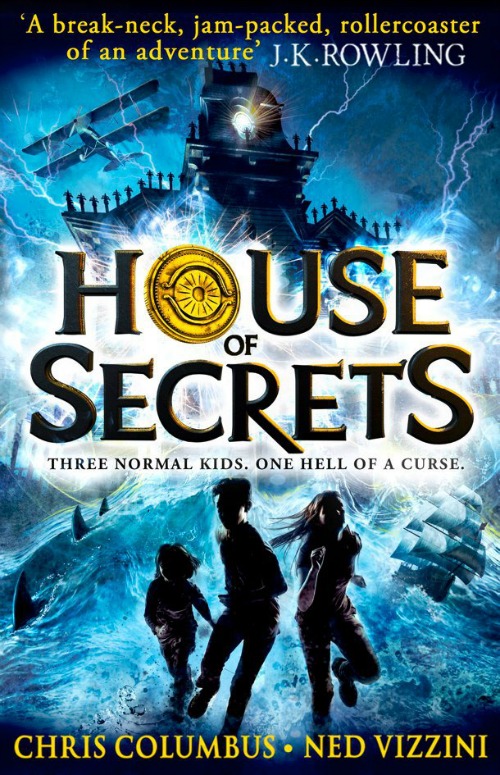 Life had seemingly ground to a halt after their father lost his job due to an 'incident' at work. Now the Walker family were living in a tiny apartment, with no sure way on how and when they were going to move forward.
Until their parents found a new start in a beautiful Victorian house, overlooking the Golden Gate Bridge and San Francsico Bay. The family is now set on moving into Kristoff House; a place which they'd discovered was built by writer and Occultist, Denver Kristoff, and it was just in their price range. It was absolutely perfect. Too perfect.
All too soon, the three Walker Children are thrust into a world that is born from the dead writer's twisted imagination. They had to quickly learn that when something is too good to be true, it usually is; now they must cross a plethora of nefarious fictional characters and alien landscapes, in order to obtain a deadly book that might save their parents. And themselves.

When I found out about this book, I was overly excited; although I know very little about YA writer Ned Vizzni, his co-writer made me a little weak in the knees.
With the first two Harry Potter films, The Goonies, Mrs Doubtfire, and Home Alone under his belt; film maker Chris Columbus needs absolutely no introduction. All you need to know is that he certainly has the Midas touch when it comes to children's entertainment.
My expectations just went through the roof, I just knew I would be immersed in a beautifully picturesque world and I absolutely could not wait! The anticipation was certainly worth it.

This was a fantastic read. It was like reading a copy of Cornelia Funke's Inkheart, and at the same time being chased by Death-Eaters through the The Forbidden Forest, while you're blindfolded on your Nimbus 2000. It's overflowing with adventure and suspense, and rapidly took me into new directions all the time. At first I started to get annoyed with the pacing, too much seemed to be happening at once but once I'd let go of how I felt it should be, I found myself enjoying it an awful lot more.
I really enjoyed the characters, the Walker siblings managed to be quintessentially family orientated with just the right amount of argumentative behaviour. It seemed like a true representation of what family life is like, I always feel a bit on edge when siblings in fiction get along perfectly.

The book read just like a screenplay, the images were so vivid and it was described so perfectly, I had absolutely no trouble imagining this as a film. I suspect a lot of this has to do with Columbus's writing style and although it would make an incredible movie, I felt like this was his chance to really go wild with a story without a budget looming over his head.
I'm really excited to see how they continue with this series. If the first book is anything to go by, I know the ride isn't quite over yet.

Review: A Storm of Swords 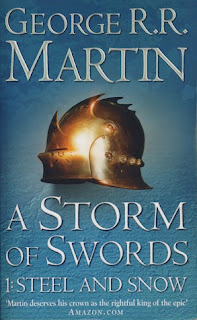 I decided with this, I'd read both parts before I reviewed it. Forgive me for the length of the review. After all, I would have only been getting half a story; my grumbles, if I had them, would have to wait.
Having finished the last pages of 'Blood and Gold' mere minutes ago I think it's safe to say: bloody hell! Books very rarely render me speechless, I can only think of a handful of times; this is one of those.

Many of the characters are suffering from the aftermath of the Battle of the Blackwater. Tyrion Lannister must come to terms with his thankless father reclaiming the spot as the King's Hand, as well as the more personal afflictions that came in the wake of the disaster.
The Onion Knight pays dearly at the hands of the Pyrcomancers, and must now decide where his loyalties truly lie. War is savaging Westeros, as Brienne of Tarth attempts to see the Kingslayer home in order to return Catelyn Stark's daughters safely. Jaime, ever the walking target makes this as difficult as humanly possible. Meanwhile Jon Snow struggles with the vows of Black Brothers, as he rides alongside the Freefolk; and Arya Stark continues her journey across the lands with Hot Pie and Gendry.

Part One was a strange thing for me, Martin kindly left a note at the beginning about the sequencing. He made it clear that the opening chapters overlap what happened in 'A Clash of Kings' and doesn't follow directly from where it ended. Taking a break from all the bloodshed that happened in its predecessor, 'Steel and Snow' focuses more on the plights of its characters.
Considering the amount that happened within this first part, the pacing is akin to the ascent of a mighty roller coaster. It was slow going, and probably the longest I've taken with any other book in this series. At times the anticipation was a little too much to bear, and I gave up reading for weeks at a time. I managed to pull through it though, the end of the book reached its peak height I knew it was only a matter of time before I was sent thundering down. And around. And upside down. 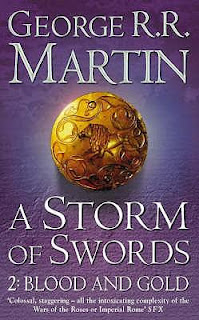 This is where Part Two came in, as well as the absolute sickly bittersweet greatness that is George R. R. Martin.

Everyone pays for transgressions in this book, whether it was theirs to begin with, or not. Bodies are stacked higher than the wall the Black Brothers guard. No one is safe, no one. Not the characters, and especially not us. If you think the books pages will keep you safe, I assure you they absolutely will not.
I was left reeling by the end of this, my head was spinning and my legs felt like jelly. I spent most of my time reacting as though I'd just been sucker-punched in the solar plexus. To reach for my earlier analogy this really was one roller coaster ride, and I was thrown about in hopeless abandon.

I'm back in the place where I won't tell you what happens in this part of the book because I feel like as a reader you need to get there yourself. One great thing I can tell you about is the character development of Jaime Lannister, his chapters are a welcome addition to the story and I pray to the Fantasy Gods I get to see a lot more of him.

Before you pick this up, I highly suggest you read these two books back to back. It seems like a daunting task and I admit the first part is but it is essentially one book and should be treated as such; 'Blood and Gold' should come to you as easy as breathing. You won't regret it, and remember to applaud Mr. Martin as I did, he certainly deserves it.