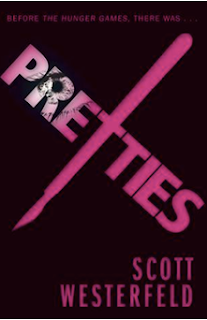 When we first meet Tally Youngblood in Uglies, she is living in Uglyville, waiting for the day she can join the land of the Pretties via mandatory beautifying surgery.
After going on the run and realising that actually, all the Pretties have lesions in their brains to make them complacent- Tally voluntarily undergoes the transformation in order to help find a cure.
In Pretties, we are introduced to the Pretty Tally, who has no recollection of her time in the wild or her dear beloved, David. Now she's all about the parties, the drinking and the beautiful people; the beautiful people.

There is so much wrong with this book, I'm unsure of where I should begin, so I'll start in the most obvious place, the language.


The Pretties like, have this dialect that they think is way bubbly, when in actual fact it's totally missing. It's like, zero milli-Helens out of a possible one whole Helen. I'm sure Scotty-wa didn't mean for it to be bogus, but it was just completely misery making.

Apart from being completely distracting and ridiculous, it made the whole of New Pretty Town seem like they were extras in Bill and Ted's Excellent Adventure. It was really a huge obstacle in the way of me actually enjoying the book, and it wasn't the only one.
The only redeeming quality in this book was the fact that there wasn't a blow-by-blow account of Tally on her hover board, Tally falling off her hover board and Tally being saved by her crash bracelets. I count it as a small mercy though, and not an all out win.

I'm well aware that sometimes in a series, books can follow the same formula; this happens a lot for example, in the Alex Rider series. However, Pretties has exactly the same plot as Uglies. Instead of wanting to be Pretty, Tally this time wants to be a Crim- her whole world seems to revolve around this clique and her quest to belong in it. Once she gets lost in the Wilderness, again; she finds herself in a love triangle, again. The same sequence of events takes the same overly long time to unfold, again. I really felt as though I was reading the same book but with additional irritating colloquialisms and some of the worst handling of taboo subjects I have ever seen.

Once the Crims become aware of the lesions in their brain, they commence in a growing rate of destructive behaviour in order to gain brief periods of clarity, or in Pretty-talk: 'bubbly'. Such behaviour includes extreme and dangerous stunts, starvation and self-injury. If that wasn't enough to set my teeth on edge, the latter gave way to a separate group called Cutters- who were ritualistic group self-injurers.
I'm not opposed to subjects such as these being approached in literature but when it's done in a way that somehow makes it entirely justifiable and the right way to deal with things, is not okay with me. Nor does this shoddy attempt at being controversial blindside me in the sheer number of plot holes littered throughout this book.
The main source being Tally's knowledge. The book starts off with her being absolutely unaware of any history whatsoever; her time on the run and the boy she fell in love with were completely alien to her. When her memories started coming back, she was what only can be described as a medical miracle; suddenly she remembered ancient history like she'd just read it out of a book. With the simple explanation of, "Tally remembered from her lessons in school..." was the equivalent of putting a plaster on a gaping wound, considering in Uglies she didn't even know what a railway line was. As a reader, I was just meant to accept this and I wasn't having any of it.

When the author wasn't bombarding us with very obvious inconsistencies he spent the remainder of his time preaching about the passed and how awful it was. The 'Rusties' and the 'Pre-Rusties' were stupid, barbaric and awful. It seems as though Westerfeld wanted a platform to release every issue he has with the world and used his book to do so. The plot once again becomes lost in this Rustie-bashing, as there is no proof to say otherwise, I tend to forget why exactly we're trying to change the world back into the awful place it once was. The world just isn't believable, there's only a shallow explanation to how the world became the way it did, I would like to say Westerfeld explores more in the next two books, but honestly I wouldn't bet my life on it.

I tried to give this series a chance, even after the first book got less than favourable reviews on my part but after this debacle I'm hanging up my Pretty dress and beating myself into a bloody pulp with the ugly stick. It's time for me to re-enter the world of the Rusties you guys, and I dont think I'll be returning.