Review: The Boy in the Striped Pyjamas 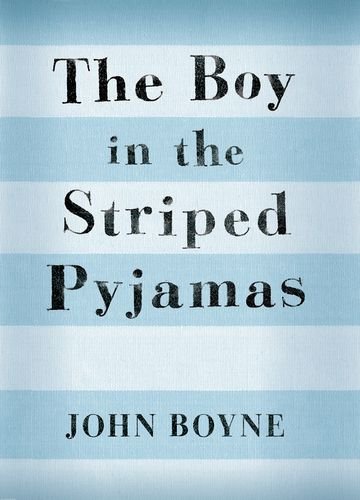 The 27th of January is 67th anniversary of the liberation of Auschwitz-Birkenau; it was by complete coincidence that I started and finished this book today. I don’t need to remind anyone of the horrors of the Holocaust or indeed, of Auschwitz, but in case you ARE wondering, a google search will more than suffice.
I wasn’t aware of the books existence, until the film surfaced in 2008 and with my natural insistence of reading the book before seeing the film it was instantly put on my list.
It is told by the ever inquisitive nine year old Bruno, who lives in five storey house in Berlin, until one day his whole life is uprooted to a much smaller house in the middle of nowhere. Away from his sliding banister, best friends for life and his grandmother, Bruno finds himself alone with no real answer to why he’s there.
He’s alone, with no one to play with until of course he meets Shmuel- a boy who lives on the other side of the fence. The boy wearing the striped pyjamas.

I honestly didn’t know what to expect from this book and I certainly didn’t think it would take me just a few hours to read. I decided against having a box of tissues nearby, (a decision I bitterly regret in hindsight). In short this is probably one of the more beautifully written books I have read in a long time.

I was physically unable to tear myself away and I instantaneously fell in love with Bruno. If not for his complete innocence, then his wonderful and frank ways of reasoning. ‘The (adequately named) Fury ... [had] a tiny moustache, so tiny in fact that Bruno wondered why he bothered with it at all or whether he had simply forgotten a piece when he was shaving.’
Of course, I fell in love with Shmuel all the same. The incredibly beautiful and ill fated boy who offers the bitter taste of realism to Bruno; facts that he often dismisses ‘Of course there were doors ... they were at the end.’ The faster they become friends, the more I wished wholeheartedly I could pluck them both from their worlds and keep them safe.
This is one of those books that keeps you rooted on the spot with the insatiable determination to read it until the very last page and I highly recommend it. After closing the back cover I spent a few minutes in complete silence, my heart and soul bleeding for those who lost their lives and those who gave up everything to try and save them.